skip to main | skip to sidebar

A SMALL REMEMBRANCE OF LES PAUL 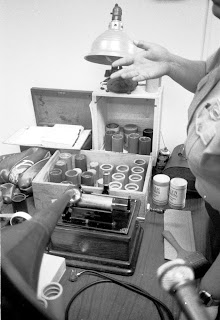 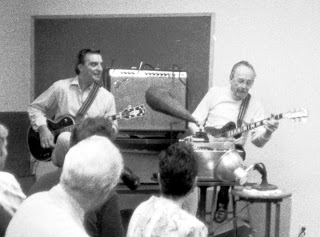 So much has been written about Les Paul since he died last week that there isn’t anything I can add about his legacy. I’m in debt to him for the groundbreaking work he contributed to recording techniques and technology which migrated from his guitar world to electronic music.

I’d met Les numerous times through mutual friends. He was always gracious and friendly though I was never completely sure that he knew exactly what I did. But I always looked forward to a friendly handshake and a short chat at the Audio Engineering Society conventions. I’ll miss that this year.

I do have one little chapter to share. On Sunday afternoon, August 21, 1994 Les came to the Thomas A. Edison National Historic Site in West Orange, New Jersey. That site is about 10 minutes from House of Music Studios where the Synergy albums were all recorded. The Edison Laboratories were where the recording industry was born. Les, accompanied by Lou Pallo, was recorded that afternoon by cylinder recordist Peter N. Dilg into an 1890s vintage horn-pickup acoustic wax cylinder recording machine. I thoroughly enjoyed the convergence of the oldest recording technology being used to record one of the men who advanced the art so significantly, playing his signature electric guitar into a Fender Twin Reverb, with a 100 year old acoustic horn shoved up against the guitar amp speakers. The perfect blend of art and technology.

APPEARANCE AT THE LEGACY OF MOOG

No, it's not a concert appearance by me. It the kickoff of a months-long exhibit at the Museum of Making Music about the Legacy of Moog. I'll be part of the weekend activities on Sunday afternoon August 30, 2009 in in Carlsbad, California having a discussion about my use of Moog and other synthesizers over the years on tour and in the studio. It should be a special weekend starting on the evening of August 28, 2008 with the opening of the Moog exhibit. Other guests include Keith Emerson, Erik Norlander, Brian Kehew and Michelle Moog-Koussa, head of the Bob Moog Foundation and the Moogseum. More about the program is at the webiste of the Museum of Making Music.
More about the Bob Moog Foundation:

Posted by Larry Fast/SYNERGY at 5:58 PM No comments:

In response to many requests, we've made some of the Synergy albums available at CD Baby. You can order physical CDs directly from them. Not all of the Synergy catalog is available from this source, but for now you can get:
Electronic Realizations
Sequencer
Cords
Reconstructed Artifacts
Posted by Larry Fast/SYNERGY at 4:57 PM No comments:

At the changeover to non-DRM files, according to Apple there was a problem with the files provided by Voiceprint Recordings. Temporarily, many Synergy titles are not available at the iTunes Store. We're working with Apple to get this fixed as soon as possible.
In the meantime, Electronic Realizations, Cords, and Reconstructed Artifacts remain available as electronic downloads.
Watch here for status updates.
Posted by Larry Fast/SYNERGY at 4:50 PM 2 comments:

March-April 2009: I've been making slow progress on some new Synergy material--very slow. No date for release of anything yet. I'll post that when it's more of a reality. It'll be a while.
Posted by Larry Fast/SYNERGY at 1:55 AM 7 comments:

More immediate is some work that I've been creating for WGN America TV which you probably have if you subscribe to cable or satellite TV. WGN America is based in Chicago but has a national reach. Here's a YouTube clip that shows off some of the new audio logos I created for them and a few incidental underscore pieces.

Posted by Larry Fast/SYNERGY at 3:00 AM No comments:

There's an interview that I did with Jamsbio Magazine. It answers some of the same questions that I'm emailed about from time to time.
Posted by Larry Fast/SYNERGY at 3:00 AM No comments:

Larry Fast/SYNERGY
News and updates about my projects.